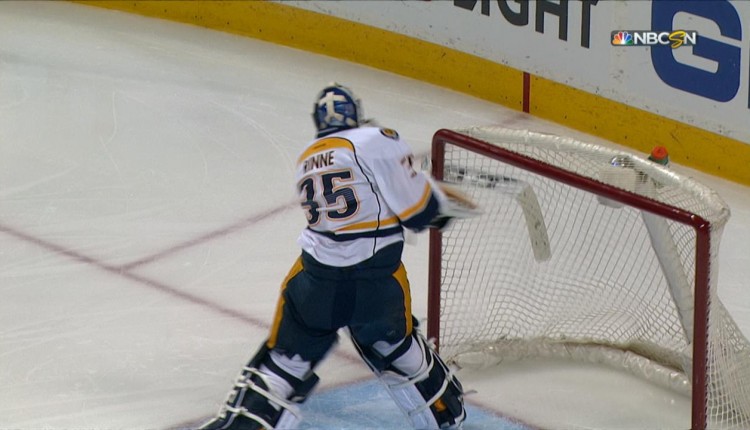 In case you missed it, the San Jose Sharks absolutely destroyed the Nashville Predators in game 7 of their second round series.

From the onset of the game, the Sharks had the upper hand and did exactly what they needed to for a game 7 win. Two first period goals gave them the early advantage, but the onslaught continued as the game went on.

After giving up a total of five goals, including two early third period goals, Nasvhille goaltender Pekka Rinne lost his cool. After realizing he was being pulled from the game, the star netminder ferociously slammed his stick into the goal post multiple times, breaking it in half.

Unfortunately for Rinne, some of the goals seeemed a bit out of his control. He certainly could have used some additional help in such a pivotal game.

The blowout and tantrum from Rinne marks the end of a season where he was definitely not at his best. He finished the regular season with a 2.48 goals against average and .908 save percentage.

Nashville is on the hook for Rinne’s contract for three additional seasons at a $7 million cap hit. His contract includes a no movement clause.