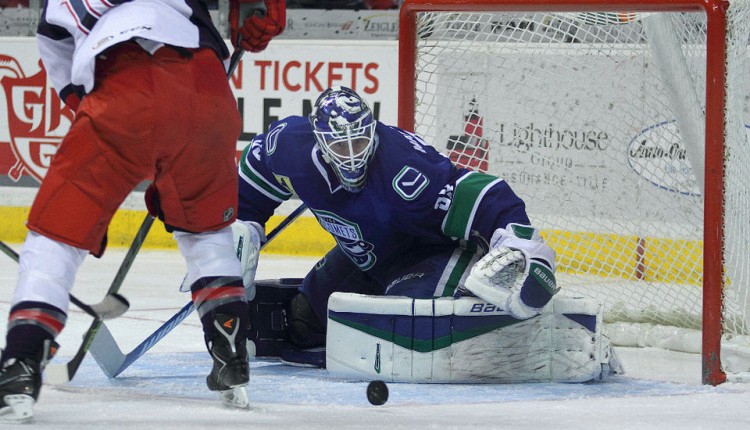 Jacob Markstrom has been having quite a memorable performance in the AHL’s Western Conference Finals against the Grand Rapids Griffins. After being pulled from Game 2, Markstrom rebounded nicely and has collected two more wins while posting impressive numbers.

Equally as impressive was his stick save during the Utica Comets game 5 victory.

The Griffins cycled the puck nicely on the power-play, and eventually took a shot on goal. The rebound created some chaos in front of the net, and the puck jumped out to Ryan Sproul who had a wide open net to shoot the puck into.

The sure goal was somehow taken away from Sproul as Markstrom reached his paddle in front of the net and somehow swatted the shot away.

Check out the video of Jacob Markstrom’s incredible stick save on Ryan Sproul below:

Markstrom and the Comets would hold on to win the game 3-2.

The Cancucks will certainly have their hands full of goalies next year as Ryan Miller, Eddie Lack, and Jacob Markstrom are all deserving of NHL time.