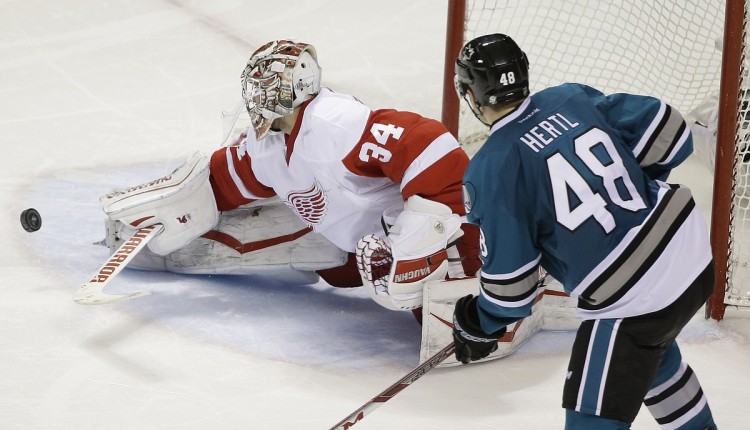 Peter Mrazek has been on fire as of late, and is now the Detroit Red Wings number one goalie. It’s clutch saves like the one in the final period of yesterday’s game against the San Jose Sharks that help to prove why.

After a turnover in their own end, the Wings found themselves in an extremely vulnerable position with Joel Ward all alone in front of Mrazek. Ward made a nice move, and fooled the Wings netminder, but Mrazek was able to reach back and block the shot before it went in.

The save kept the game knotted 1-1 with 7 minutes left to play in regulation.

As luck would have it, the puck would bounce out to Pavel Datsyuk who led a charge up up ice and assisted on Justin Abdelkader’s game winning goal.

Mrazek faced 36 shots in the game, turning away 35. He has now won three straight starts since allowing 4 goals in a rough game against the Pittsburgh Penguins.

Jimmy Howard, on the other hand, hasn’t seen game action since he was chased early on December 29th against the Winnipeg Jets. In that game, he allowed 4 goals on 14 shots before being pulled.