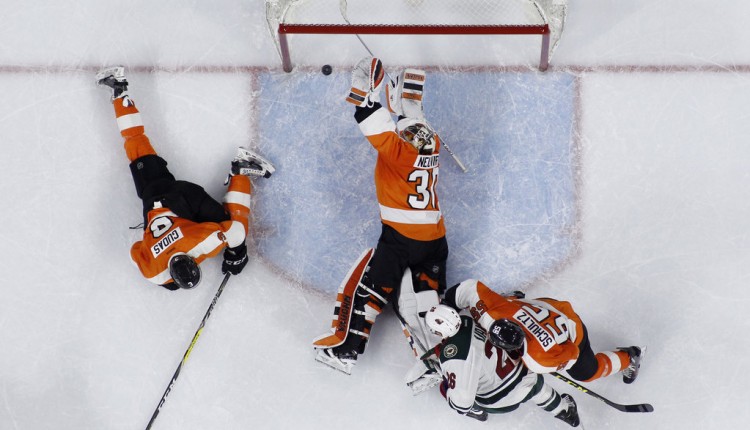 Michal Neuvirth Save of the Year Against Minnesota

We still have around 20 games left in the NHL season, but it looks like Michal Neuvirth may have captured the Save of the Year in last night’s game against the Minnesota Wild.

Neuvirth, who plays for the Philadelphia Flyers, found himself down and out in the crease with less than five seconds to play as they held on to a one goal lead. A cross ice pass came from Michael Granlund and landed on Charlie Coyle’s stick at the bottom of the circle on Neuvirth’s right. Coyle collected the puck and fired a quick shot into what he thought would be an open net. Instead of scoring in the open net, Neuvirth miraculously knocked the puck out of the air with his stick.

Some Wild players celebrated their would be game tying goal. Their hands went into the air thinking Coyle’s shot had just tied the game. The refs were quick to wave off any goal and pointed back to the face-off circle with 1.6 seconds to play.

Before the game proceeded, the play went to review to see if the puck had actually crossed the goal line. The review was clear, however, and Neuvirth stopped the puck at the perfect time.

Neuvirth would finish the game with 26 saves and now has a 14-7-4 record on the season.

Check out Michal Neuvirth’s incredible save of the year against Minnesota below!