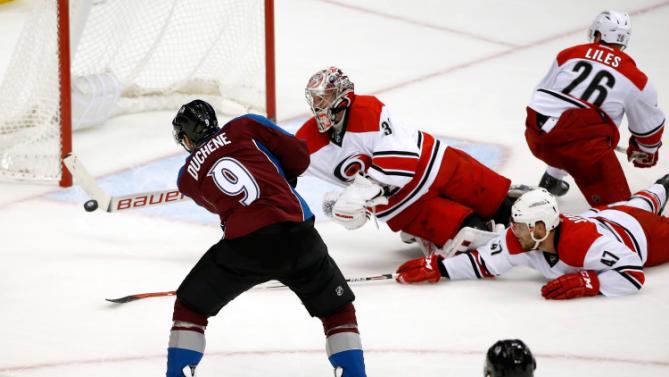 Cam Ward hasn’t been off to the best start this season, but managed to redeem himself a bit last night against the Colorado Avalanche.

Late in the third period, with the game tied 0-0, Ward was facing a 2 on 1 after Kris Versteeg stumbled at the blue line and lost control of the puck. As Jarome Iginla skated the puck in, rather than passing to Gabriel Landeskog, he opted to drop the puck back to Matt Duchene who was a third man rushing in.

Duchene remained patient with the puck. He faked a shot which two Hurricane defenseman bit on, as well as Ward. As Duchene moved to the side, he shot at what looked like an open net and a sure goal. Instead, a diving Cam Ward came across and blocked the shot with his stick.

Check out the video of Ward’s unreal stick save below:

Ward and the Hurricanes would go on to shut out the Avalanche with a final score of 1-0. Viktor Rask scored the OT winner, but Ward really saved the game and the win for Carolina.