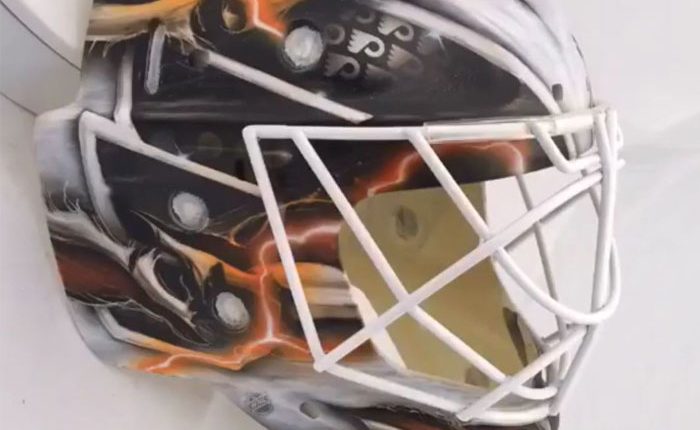 Anthony Stolarz, a goalie in the Philadelphia Flyers system, has taken to Instagram to unveil his latest goalie mask design.

Stolarz, a second-round pick (45th overall) by the Flyers, currently plays for the Lehigh Valley Phantoms in the AHL. In his new mask design, you’ll notice the subtle Flyers logos in white which are shown in a couple of different areas. The Lehigh Valley Phantoms logo can also be seen front on center on the lower portion of the mask, beneath the cage. Stolarz also had his number included beneath the logo.

On the back of the mask, Stolarz had his nickname “Stolie” painted on. Just beneath that, the quote “Rule #76: No Excuses, Play Like a Champion” can be seen. It’s awesome that Stolarz is able to take a humorous quote from the movie Wedding Crashers and use it so well on his mask.

New mask for the year

This coming season will be Stolarz’s third with the Phantoms. Last season he finished with a 21-18-7 record while working as the starter. He posted respectable numbers, including a .916 save percentage and a goals against average of 2.60. The 6′ 6″ goalie also spent two seasons with the London Knights prior to his time in the AHL.